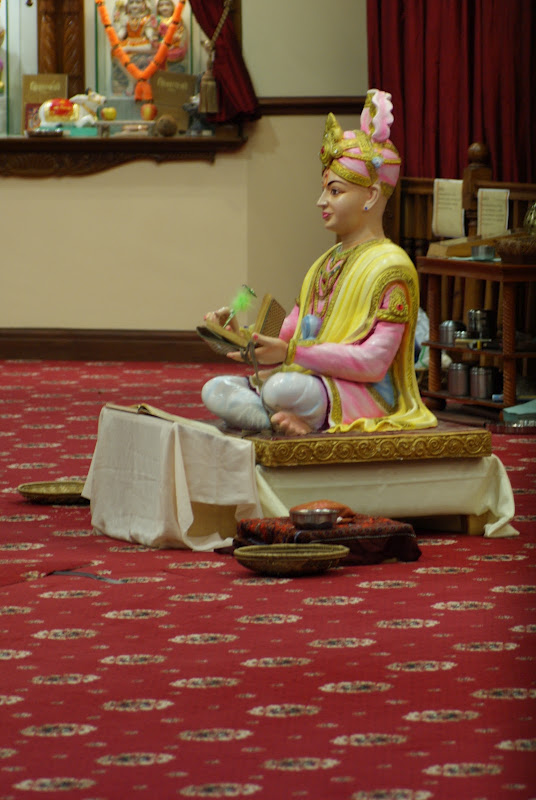 This day marks the coming of the spring season. There is a story of Lord Krishna who joyfully plays with His companions whilst travelling. Lord Krishna, the Pandavas, Laxmiji in the form of Rukhmani, and other devotees were travelling to Revtachal (Mount Girnar). On arriving at Revtachal, Lord Krishna and His travelling party were delighted to see blooming flowers of numerous colours. They made garlands and kundals from the flowers and adorned them on Lord Krishna. They played with the flowers by showering them on each other and the entire place was covered with coloured petals. The showering of Gulal powder over fellow devotees represents this occasion.

On this day in Samvat 1882 (1826 AD) in Vadtal Lord Swaminarayan unveiled the jewel of the Sampraday, the Holy Scripture called SHIKSHAPTRI (book or letter of teaching).

It consists of 212 slokhas illustrating how one should lead a fruitful and prosperous life. It is a genius scripture, which takes into consideration time and place, extracting the essence and key points from important Hindu scriptures. The Shikshapatri contains the principals of Hindu dharma and the fundamental foundations of our core beliefs. As Lord Swaminarayan explains in the Slokha's, He has written the Shikshapatri for the welfare of every soul, and those who abide by it will achieve great happiness including, Dharma (Virtue), Artha (Wealth), Kama (Pleasure) and Moksha (Salvation).

Shikshapatri was originally written in Sanskrit by Lord Swaminarayan himself and later translated by great saints present at the time. It is available in two forms the short version, which is to be read as part of daily pooja and secondly in a more detailed version called Shikshapatri Bashya.

Shikshapatri Shlokas are read every day during the morning pooja.

A copy of the Shikshapatri can be found at the Bodlien Library at Oxford University. This Shikshaptri was gifted by Lord Swaminarayan to Sir Malcolm, the governor of Bombay during the British Empire.

On this day devotees in our temples perform poojan of the Shikshapatri. The 212 Slokhas are recited and prashad of popcorn is served. The playing of colours is performed in the temples by sprinkling Kum Kum on the devotees whilst observing the rules of our dharma.