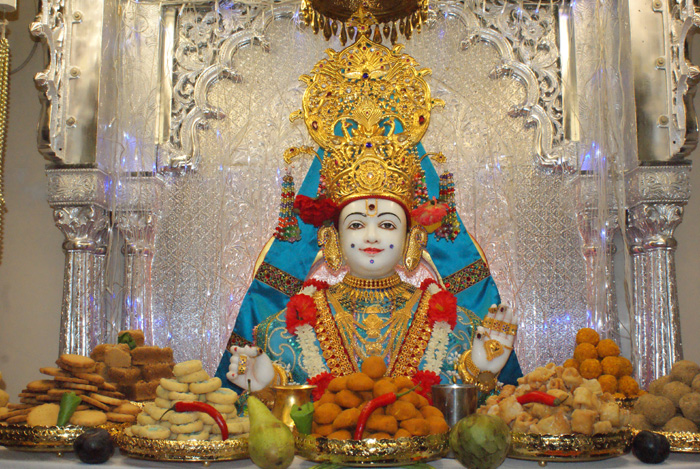 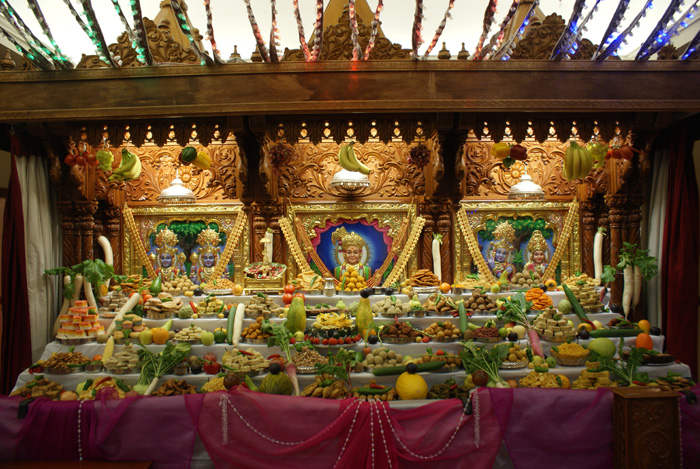 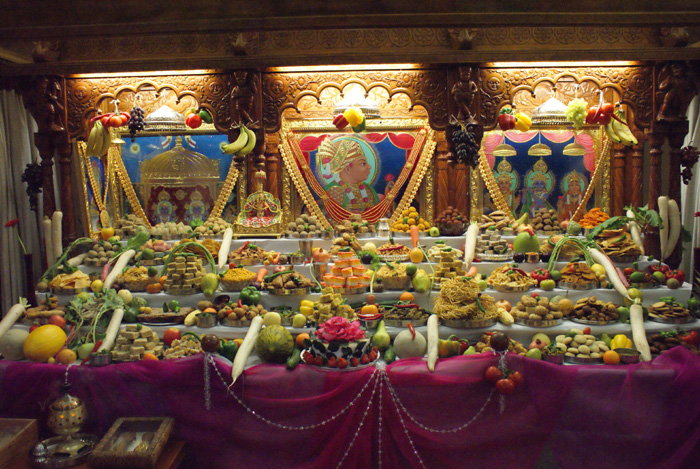 The Annakoot celebrations take place on the first day of the month of Kartik which is the first month of the Hindu new year. The Monsoon season has come to an end and new harvest has been brought in from the fields and grains and cereals are plentiful. To thank the Lord for the good year that has just ended, plenty of delicious foods are prepared and offered to the Supreme Lord.

In Lord Krushna's time People of Gokul, where Krushna lived, used to offer food to Lord Indra, the God of rain. On one occasion Lord Krushna questioned his father Nandbaba as to why all the food was prepared and offered to Indra. Nandbaba said that Indra gave them rain which makes the crops grow and produce grains which we harvest and feed ourselves and live happily in Gokul. Lord Krushna said that it is not because of Indra that we are happy. Indra only carries out the duty that he has been given by Purshottam Bhagwan. We are happy because of our good Karma that is bestowed upon us by Purna Purshottam Bhagwan. We should pray to the Lord to better our Karma. Brahmins do it by teaching, warriors do it by fighting for the motherland and we do it by farming the land and harvesting crops to feed the people. All Villagers of Gokul have been praying to Indra and offering him food but he has never appeared before them to give darshan. Instead of Indra we should offer our devotion to Govardhan mountain as it is more useful to us. Our cows, which give us milk, graze on its slopes and it protects Gokul from strong winds.

Everyone accepted what Lord Krishna had said. They all went home, prepared many varieties of foods and placed all the food at the base of Goverdhan Mountain and began to worship it. Krushna was very pleased and he manifested himself as Govardhan and appeared on the top of the mountain and accepted the prayers and food offerings of everyone from Gokul.

When Lord Indra learned that prayers were offered to Govardhan rather then him, he became angry and sent his most vicious clouds on Gokul. The clouds unleashed rain and lightening for seven days and Gokul was about to be flooded. People of Gokul prayed to Krushna who lifted Govardhan and held it on his little finger and asked everyone to take shelter under it. Thus Gokul was saved from the wrath of Indra. From then on, on this particular day Hindus celebrate Annakoot.

On the day of Annakoot which is the first day of the Nutan Varsh (New Year) all Swaminarayan Temples, all over the world, celebrate this day with great pomp and splendor. People get up early and go to the temple for darshan and offer their prayers to Swaminarayn Bhagwan. Temple buildings are decorated with thousands of lights and lamps and candles are lit everywhere. Many varieties of vegetarian food, exotic fruit and vegitables are offered to Bhagwan and are displayed in the form of a mountain just like Govardhan. Before coming to the mandir everyone put on their best clothes and jewelry and go to visit their friends and relatives and offer best wishes for the New Year. People exchange gifts and children are given money. Most of then gather in the mandir and greet each other, sing kirtans and play musical instruments. A communal worship in the form of an Aarti is performed and then everyone enjoys a special meal which is prepared earlier. In order to show their strong faith in Lord Swaminarayan people make generous donations on this day. In the evening all that food that forms the Annakoot is offered as prashad to all the satsangis.