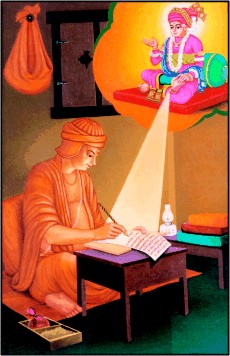 At a very young age, Jagnath Bhutt was educated in Sanskrit and learnt other activities which were required as a Brahmin. He was obeying Naishtik Brahamchari (celibacy) rules. He regularly associated himself with holy Sadhus. One day, he came in touch with Swaminarayan Sadhus which were going to Durghpur (Gadhada) and decided to join them.

Lord Swaminarayan once said, "this swami is my devote Sadhu and possesses great saintly values which are increasing over time, he has some saintly qualities as Muktanand Swami." (Vachanamrit, Kariyani 3)

A mango tree, now in Laxmiwadi

An ox which was used for transportation of sadhus

Shukanand Swami spread satsang in Umreth town and towns around it after Lord Swaminarayan left this world.

He was one of the five sadhus who compiled and wrote the Vachanamrut.