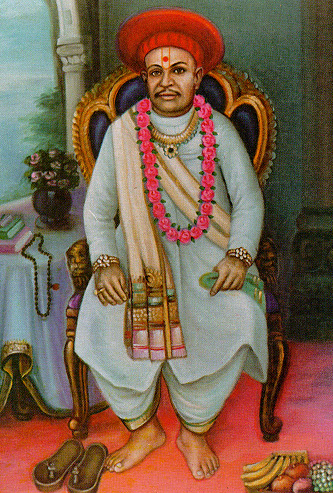 Keshavprasaji Maharaj, the son of Ayodhyaprasadji, was born in Ahmedabad at his ancestral house near Rangmohal. He was blessed with all the divine qualities of the holy family. His youthful energies were directed towards worship and devotion. He followed in the footsteps of his father and continuously served the seat. After the succeeded as the Acharya of the seat, he observed every tradition of the sect very faithfully and religiously.

He was a bit short-tempered by nature. But that never obstructed his performance as an Acharya. He equally loved by nature. He always encouraged learning and the learned. He used to keep the company of learned sadhus and saints whenever he undertook a religious trip.

He was very instrumental in the writing of the Sanskrit comments on 'Satsangi Bhushan.' he always encourages literary endeavors. Many a king of the erstwhile princely states like Dhrangadhra, Morvi, Vankaner, Limbadi, Vadhvan, Malia and Bhuj-kutch were brought to the holy fold at his behest. His efforts bore fruits in the form of various temples at Karachi, Prantij, Manasa, Dabhan, Charadwa, Visnagar, and etc. the constructions like halls of assembly at the temples of Ahmedabad, Muli, Dholka, and Jetalpur are due to him.

Acharya Maharaj served the seat for nearly twenty-two years. He selected his son Purshottamprasadji as his successor to serve the seat.