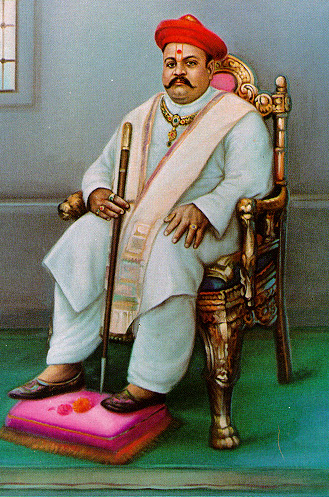 A son of Acharya Vasudevprasadji Maharaj, Devendraprasadji was born in Ahmedabad on the auspicious day of Sharadpurnima. He was just like an incarnation of the full moon with a cool head, calm heart and many other virtues. Under his able stewardship, the devotional pursuits of the Swaminarayan sect increased by leaps and bounds. Devendraprasadji had studied Sanskrit at a very young age. He could compose verses in Sanskrit. He was equally at eases with Prakrit (Gujarati) and English, and music was a great part of him. Through he was seemingly not very strong physically, his stamina and will power were proverbial. He could undertake the most arduous tasks with ease.

He was only fourteen, when he succeeded his position. The trustees looked after, therefore attended to the administrative affairs. Yet his skills were evident. He was instrumental in building various constructions and facilities for saints and devotees. He constructed many buildings. The most important task he performed was to donate all the objects that had been used by Shree Hari and subsequently he himself was in possession of them as objects to charity. Devotees feel very inspired by the very sight of such holy and historic objects

He was also a great patron in literature. The Gujarati translation of three Holy Scriptures 'Satsangi Jeevan' and 'Hari Krishna Lilamrit' is available to us only due to his efforts and encouragement. It is believed that the bulk of the religious literature produced during the tenure of Acharya Devendraprasadji has no parallel in the history of the sect. He was keenly interested in the promotion of education, and formed the Devendraprasadji Education trust. 'Sahajanand Arts and commerce colleges' are its offshoots. He has three sons and two daughters. The eldest of these, Tejendraprasadji, was handed over the reins of the Swaminarayan sect.